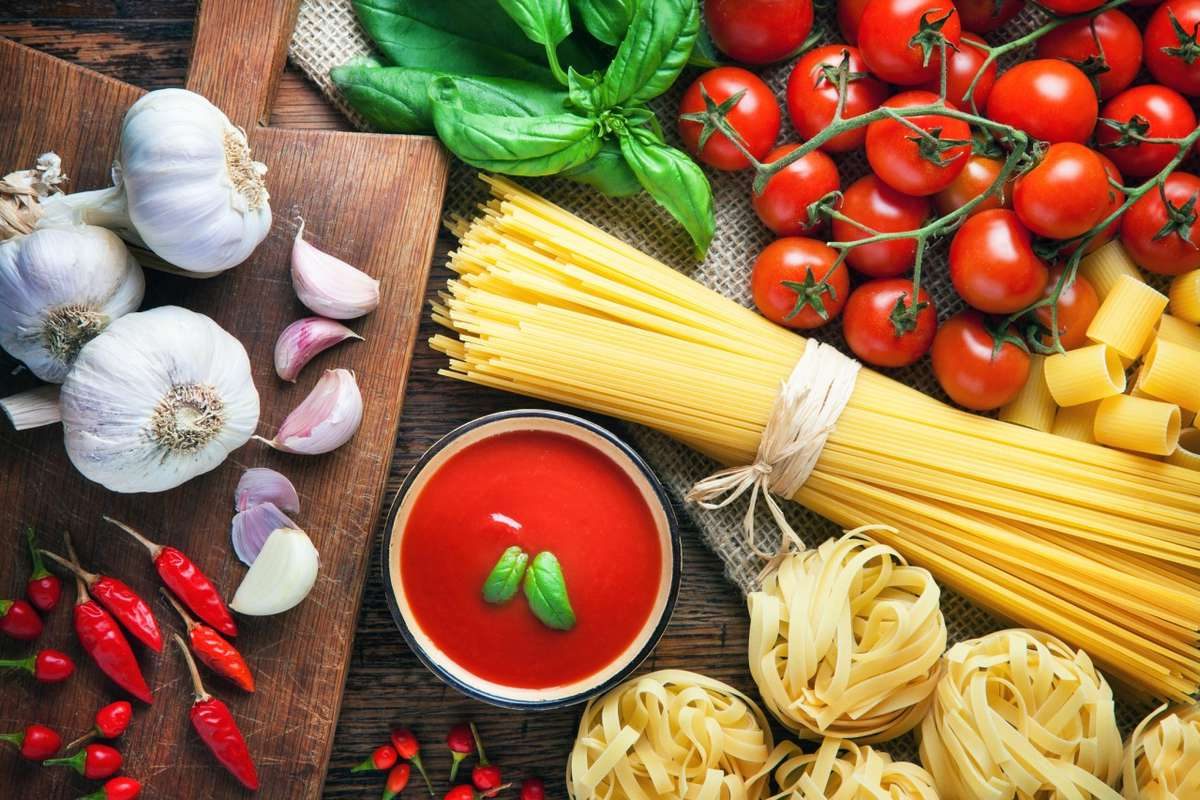 Italy attracts travellers from around the world keen on exploring its art, nature and gastronomical wonders. With its rich and diverse cuisine, Italy offers a long list of famous and traditional must-eat dishes.  We have selected the top five that cannot go missing on your menu.

Pizza is a dish that has become transnational food, the most famous ambassador of Italian cuisine.

Born as a plain, flat and round bread in 18th-century Italy, originally the pizza didn’t have any topping. It was the food of the poor, tasty, filling but cheap.

In 1861 Italy was finally unified and the new kingdom had a royal couple that ruled the country and to admire.

In 1889, Italian Queen Margherita and King Umberto I  travelled across their kingdom, down the peninsula to Naples. Much of the population was eating a large piece of bread and the queen got interested in tasting it.

Queen Margherita eventually invited Raffaele Esposito, a pizza maker, to make some pizzas for her. The cook baked a pizza topped with fresh basil, Mozzarella Cheese and tomatoes, to pay homage to the tricolour Italian flag: red, white and green. As to pay tribute to the Queen, after her royal name, the pizza was christened Margherita.

After  World War II, there was a pizza boom and pizza began to be produced, cold and eaten around the globe, starting with the USA and anglophone countries. Today in America, October is the National Pizza month since 1987. The pizza industry grosses over $30 billion every year and 17% of U.S. restaurants are actually pizzerias.

The legend dates back to the golden days of the Roman Empire. For centuries, cacio e pepe has been the perfect meal of Roman shepherds. Dried pasta, aged pecorino and black peppers are easy-to-carry ingredients and hard to spoil. The starch inside the spaghetti and the grated pecorino combined in the right way are enough to create the cacio e pepe sauce. As in many Roman recipes, the pepper have to be very abundant.

The secret to obtain a creamy sauce? Combine best quality Pecorino Romano and a few spoons of the cooking water. Despite what many people think, cacio e pepe recipe does not need any oil, cream or butter.

Several are the legends about Tiramisù and its origins, many the cities that claim to be the first place where Tiramisù was conceived and created.

Tiramisù belongs to the old tradition of the Veneto cuisine, but it does not date back that far.

It was first created in the 1930’s in the fair city of Treviso: its birthplace was Siora Beppa’s fancy parlour, namely a brothel.

Both customers and pretty employees needed something sweet and reinvigorating to eat and go for a second round. By whisking eggs, marsala, dark coffee and mascarpone, it was easy to come up with a sultry cream to be served with savoiardi [ladyfingers].

Moreover, Tiramisù literally means ‘lift me up,’ and it is pretty clear the reason why this dessert was named that way.

Nowadays we all know it in its cake-shape: you first lay in a plate the ladyfingers (dipped in coffee), you add a layer of mascarpone cream and so on and so forth, for as many layers as you want. Sometimes it is topped with some chocolate chips or shavings.

Pasta comes in many forms and shapes. Lasagne is a wide, flat pasta shape and allegedly one of the oldest to our knowledge. Lasagne usually indicates a dish made with this type of pasta in several layers interspersed with various ingredients, often besciamella and sauces. The most traditional one is with the Bolognese sauce, commonly known as ragù (made with ground beef.)

Traditionally, the dough was prepared in Southern Italy with semolina and water and in the northern regions with flour and eggs.

Even if Italy is often regarded as the home country of pasta, riso and risotto is another popular dish served as primo piatto. Originally from Asia, rice has become a major produce cultivated in the country, especially in some areas of the North.

The most famous risaie, paddy fields, are situated in the Northern part of the country. The lower part of the Pianura Padana, Lombardia and the area of Vercelli and Novara, in Piedmont, are famous for their rice production.

Amongst many types and ingredients, Risotto ai funghi (with mushrooms) is one of the most popular variations. It is is often topped with shaved truffles, creating a dish that is typical of the mountain regions of Italy. You’ll find it often served as a primo at sagre dei funghi (Mushroom Festivals) all around the peninsula, as its creamy consistency enhances the texture and the natural flavor of mushrooms.