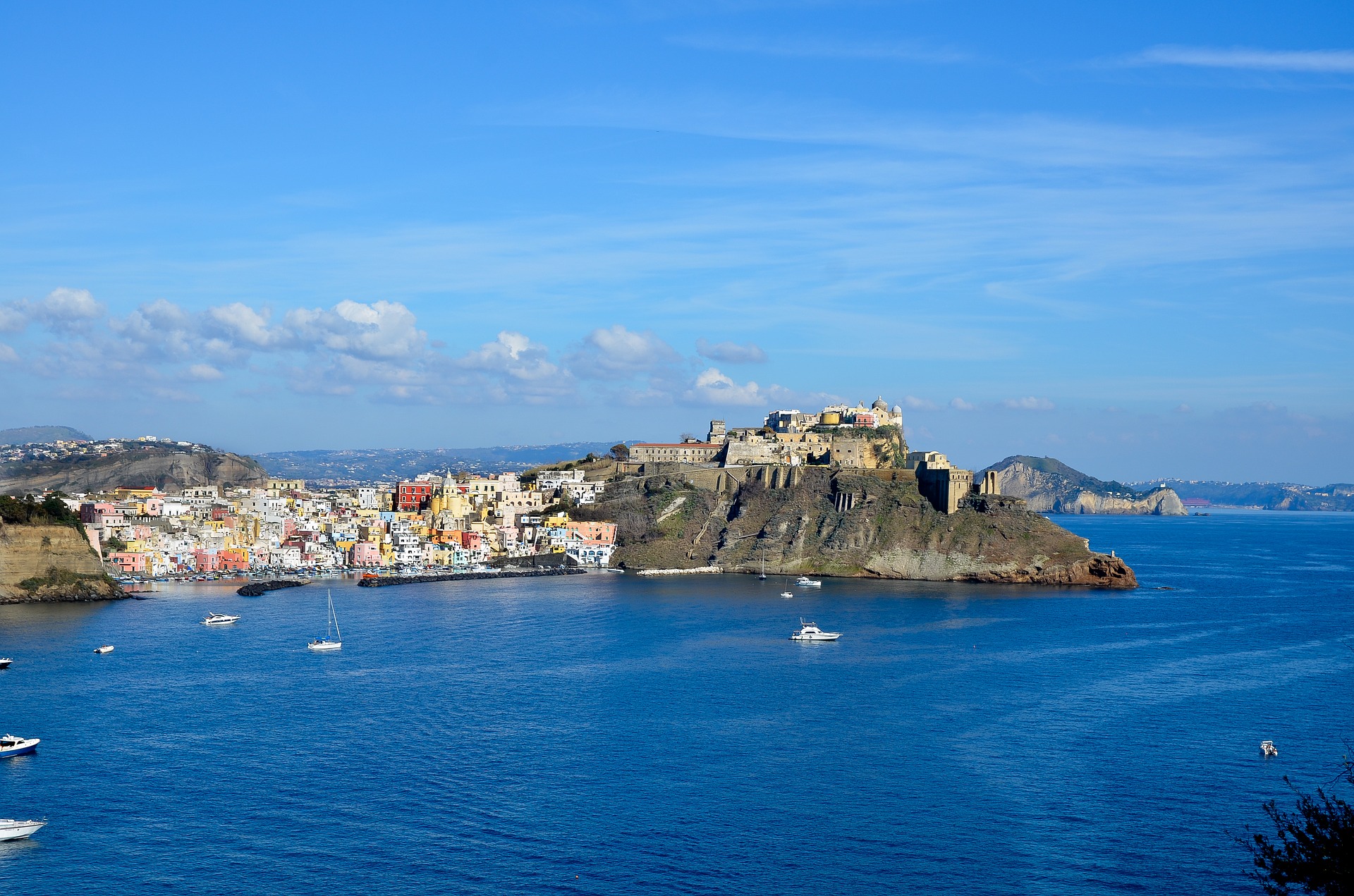 Procida is the Italian Capital of Culture 2022 and the first island to hold this title since its inception. It won the competition thanks to its program titled La Cultura non Isola (culture doesn’t isolate), “capable of conveying a poetic message, a vision of culture that reaches out from the tiny reality of an island as a well-wish for all of us, for the country, in the months to come,” as the commission stated. Although the inaugural ceremony, initially scheduled for January 22, has been postponed to spring 2022, we can start discovering this magical island straight away.

A few facts about Procida, the Italian Capital of Culture 2022 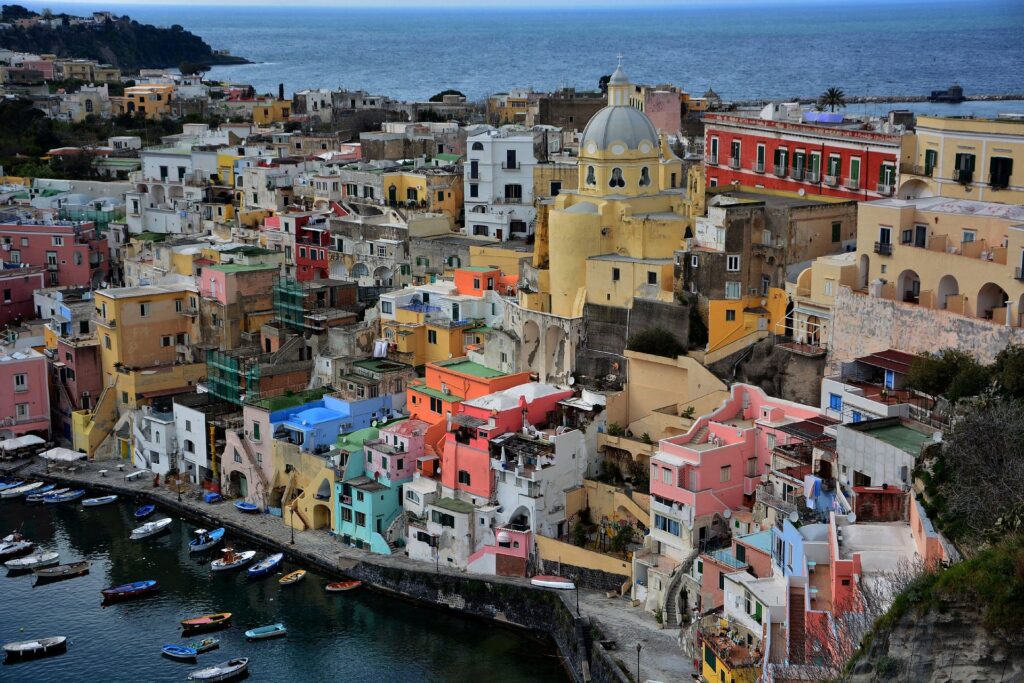 The colorful houses of Procida

Procida is the smallest and least known island in the bay of Naples, the neighbor of Capri and Ischia. Despite being the backdrop for popular films in the 1990s (read below), this hidden gem in the Mediterranean has preserved its authenticity and strong maritime identity. Moreover, it is the only Italian destination recommended by National Geographic among the 25 most exciting destinations for 2022.

Admired for its lively architecture and vibrant colored houses typical of the Mediterranean area, Procida has a long history. Some historical artifacts dating back to the 16th-15th centuries B.C. found on Procida and the nearby islet of Vivara (once connected to Procida) suggest that this area was inhabited by Mycenaean Greeks. Later, during Roman rule, Procida became a renowned resort for the patrician class and a land devoted to viticulture. However, the island’s layout and architecture has medieval origins and the lively colors of the houses may be probably attributed to the fishermen’s willingness to recognize their home even from the sea. 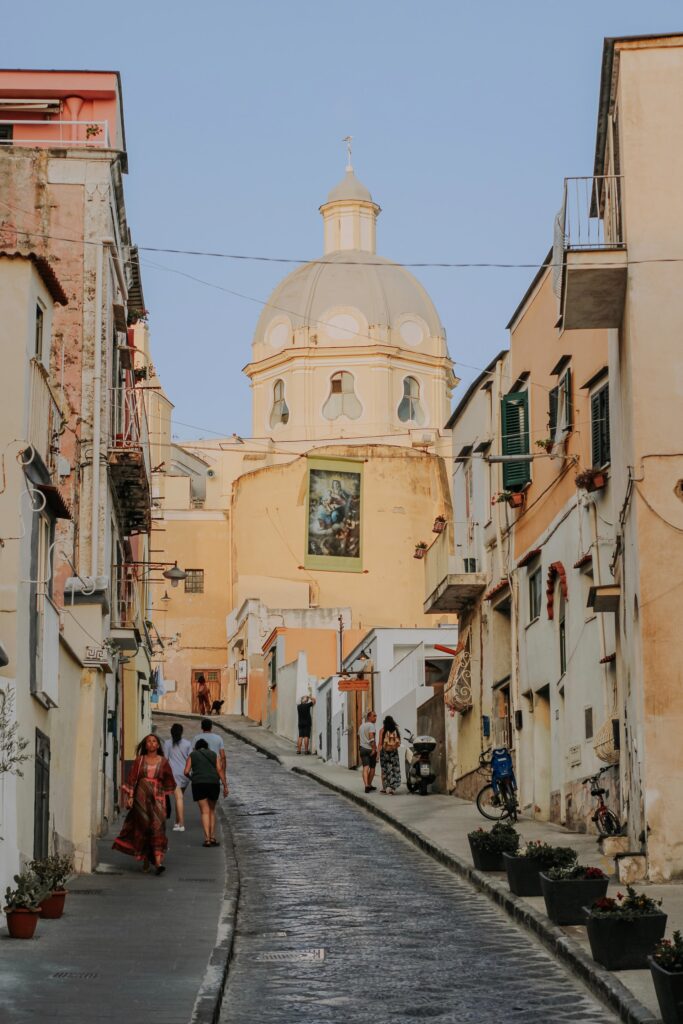 The dome of the Sanctuary of Santa Maria delle Grazie Incoronata, one of Procida’s religious buildings

This picturesque island has inspired ancient and modern-day writers alike as well as filmmakers. For example, we can mention Virgil with the Aeneid, Giovanni Boccaccio with The Decameron, and Elsa Morante, whose Arturo’s Island is set on Procida. Marina Corricella, a 17th-century harbor and the island’s oldest fishing village, is where Michael Radford filmed some scenes of Il Postino – The Postman, the Oscar-winning movie starring Massimo Troisi. A few years later, Anthony Minghella chose Procida, Ischia and Positano to represent the fictional village of Mongibello in The Talented Mr. Ripley.

Some reasons to visit Procida

View of Terra Murata from the Corricella harbor

The island chosen as Italy’s Capital of Culture for 2022 has presented a rich calendar of events dedicated to its history, art, music, food, architecture and natural beauty. While being often overlooked by tourists in favor of the glamourous neighboring islands, it is mainly visited by Neapolitans, who appreciate its authenticity: on Procida you won’t find nightclubs or luxury hotels; on the contrary, you’ll have the chance to experience local traditions and slow tourism.

Pastel-colored houses contrasting with the deep blue of the sea, narrow alleyways winding through the town, ancient civil and religious buildings that testify to the history of the island: this is a picture of Procida. A scenic viewpoint is offered by the medieval walled town of Terra Murata, which overlooks Corricella and hosts the famous Palazzo d’Avalos (built in the Renaissance), which from 1830 to 1988 served as a prison for some of Italy’s most violent criminals.

Check out the official website procida2022.com for further information