The human language: Dante and the Italian language 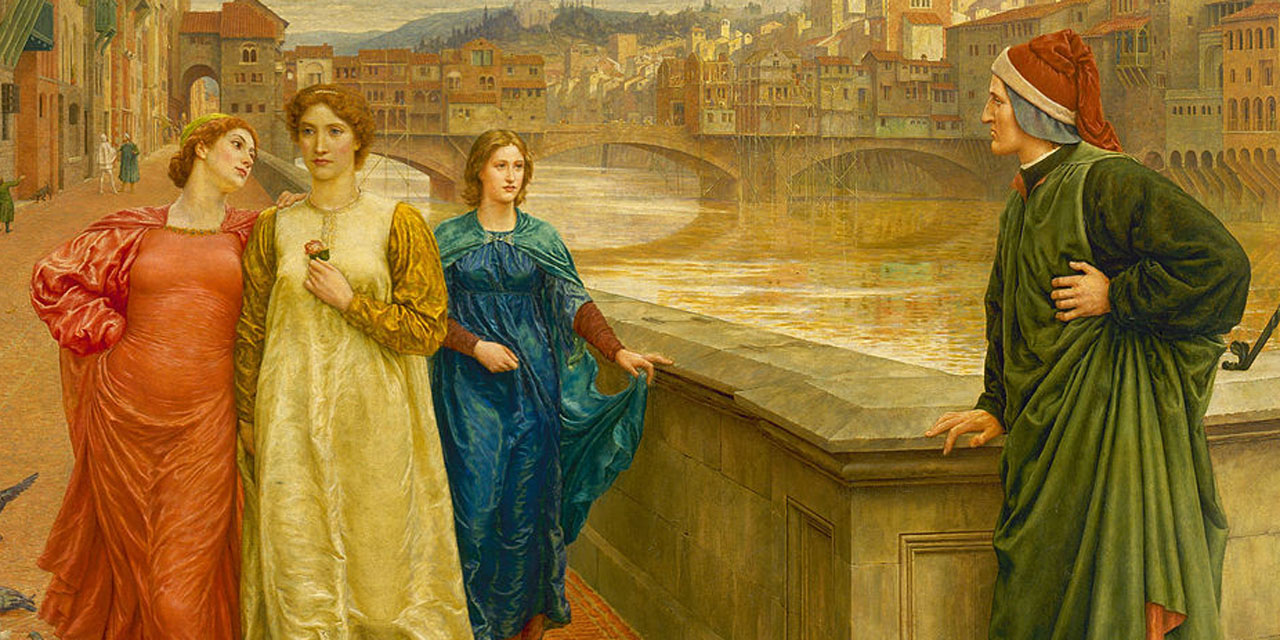 The 18th Week of the Italian language in the world is titled “ITALIAN AND THE NETWORK, THE NETWORKS FOR ITALIAN.”

Every culture, society and country creates its own network through art, literature, the symbols of the national identity and, of course, the language. In the case of Italian, a tribute to Dante the father of the Italian language is mandatory. He was first great creator of human and cultural “networks” due to his exile and his artistic ability to create great poetry.

Dante Alighieri was born on May 29, 1265 in Florence to a family of the small nobility. At 17, in 1283, when his father Alighiero di Bellincione, a merchant, died, Dante became the head of the family.

The young Alighieri follows the philosophical and theological teachings of the Franciscan school in Santa Croce and of the Dominicans in Santa Maria Novella. In this period he befriends and begins a correspondence with some young poets nicknamed “stilnovisti” [the new style makers.]

At 20 he married Gemma Di Manetto Donati. Four children were born from the marriage: Jacopo, Pietro, Giovanni and Antonia.

Two years after the death of Beatrice, in 1292, Dante begins to write “Vita Nuova.” He devoted himself completely to poetry, to the study of philosophy and theology, particularly Aristotle and St. Thomas Aquinas.

He gets interested in the political life of Florence but, in 1293, when the nobles are excluded from the Florentine political scene, the young Dante must take care of his intellectual interests alone.

In 1300, Dante is elected among the six «Priors», the highest magistrates of the government that made up the Lordship of Florence.

But in 1301, Dante was called to Rome at the court of Pope Boniface the 8th. When political trials begin, he is accused of corruption, suspended by public offices and sentenced to pay a heavy fine.

At the beginning in 1304, a long exile begins for Dante. He is always welcomed with great favour: in Verona, in Lucca, in Venice, perhaps even in Paris. In 1306 he starts writing his masterpiece, the Divine Comedy.

In 1310, with the arrival in Italy of Henry VII of Luxembourg, Roman emperor, Dante hopes for the restoration of imperial power, but Henry suddenly dies.

In 1319, Dante is in Ravenna at Guido Novello da Polenta’s court, a powerful ruler who, two years later, will send him to Venice as ambassador. Returning from this engagement, ​​Dante was struck by malaria and died in Ravenna at the age of 56 on the night between 23 and 24 September 1321. Ravenna is the city where his tomb lies.

“Rime” is the collection of Dante’s early poetic work, from the years of Florentine youth throughout his literary career until works commenced on the Divine Comedy.

The “Rime Petrose” (rocky verses) dates to 1296 and are dedicated to a Madonna Petra, a beautiful but insensitive lady.

Dante composed the “Convivio” between 1304 and 1307. The work is an anthology of essays, intended for those who do not have direct access to knowledge, due to their education or social status.

In 1306 he began to write the Divine Comedy, a sublime poem on which he worked throughout his life.

In 1308, in Latin, he composed a treatise on language and style: the “De vulgari eloquentia.” Dante analyzes the different dialects of the Italian peninsula. He founded the theory of a vernacular language he called “illustrious.” It is the first manifesto for the creation of an Italian national literary language.

With the arrival of the German Emperor Henry in 1310 Dante composed “De moanrchia” in Latin, where he declared that the universal monarchy is essential to the earthly happiness of men and that imperial power should not be submitted to the Church. On the relations between the Papacy and the Empire, Dante claims that the Pope holds spiritual power, the Emperor the temporal one.

All the great Italian poets have a female figure of vital importance, a real person or a fictional one, who acts as their muse: Petrarch has Laura, Boccaccio Fiammetta and Dante has the famous Beatrice.

In 1274, according to “Vita Nuova,” Dante first met Beatrice (Bice di Folco Portinari), a love passion that accompanied him throughout his life.

From the death of Beatrice to the years of his exile, Dante devoted himself to the study of philosophy (for him the peak of profane sciences.) He composed love poems where the style of praise as well as the memory of Beatrice are absent. The core of the poetical discourse is no longer Beatrice but “the courteous woman”, an allegorical description of philosophy, which indicates Dante’s inner journey to Wisdom.

Beatrice reappears in the Garden of Eden, at the top of the Purgatory mountain in the Divine Comedy, and accompanies Dante throughout the various skies of Paradise. A human love that becomes a divine and purely spiritual love.